As part of applying for the Spanish non-lucrative visa, one of the requirements is a negative criminal record check from the country you reside in. In my case, that’s Canada, so as soon as I arrived back from Spain I made a point of trying to decipher what exactly I needed to supply.

Once again, different consulates seem to have different requirements.

For example, the Toronto consulate says the following:

Negative criminal record (not applicable for minors), issued by the authorities of the country or countries where you have lived during the past five years, including Canada. They are issued by the RMCP.

while the Ottawa consulate says:

If you go by the Toronto consulate’s definition, then it sounds like you can simply go down to your local RCMP detachment and get a name-based criminal record check. These can be done on the spot at any local RCMP location. The only catch is that if your name matches someone with a criminal record, even if they don’t share your birthday, it will throw up a flag. But that’s rarely the case, and you can get a copy relatively quickly.

That said, if you go by the Ottawa consulate’s website, then you need to do what’s called a ‘certified criminal record check‘, which means you need to have your fingerprints taken and submitted to Ottawa for processing.

Unfortunately these two procedures are entirely different in terms of what’s required, and also what they cost. Even though I’m applying to the Toronto consulate, I felt more comfortable doing the certified record check as this is a much more stringent check than the name-based check.

I went down to my local RCMP detachment to have my fingerprints taken, which is when I hit my first roadblock. Despite me calling them a few days prior and being told I could just show up, they wanted something in writing for their files indicating the requirements for the embassy. I think they mostly want this to cover their asses in case the consulate doesn’t accept what’s given to them, but regardless it was a pretty big pain for me since I don’t currently have easy access to a printer.

I quickly went home and drafted my own letter to the RCMP, including some of the excerpts from the Spanish consulate’s website alluding to the need for a certified criminal record check. I then went down to Staples (our Canadian multi-purpose print shop) and had it printed. When I returned to the RCMP, they still gave me a bit of grief since they were expecting some document that the Spanish consulate wrote for me, but I told them not only was getting a document from them next to impossible, I couldn’t even get them to answer the phone. Ultimately they accepted the letter as-is, and ushered me into the next room with the fingerprint machine.

In the old days, fingerprints were taken with ink pads and paper. Nowadays it’s all done with electronic scanning, which is obviously much cleaner. They took a series of fingerprints (first your thumbs, then your fingers), redoing them as necessary to ensure there were high quality. This only took a few minutes, after which they pressed a few buttons and electronically transferred them to Ottawa.

As long as there’s no criminal record found (there shouldn’t be I hope!), I should have the final, official copy in the mail in two weeks or less. That’s really the last piece I am waiting for, after which I can mail in my completed non-lucrative visa application.

The process wasn’t that painful, but if you are going in I definitely recommend coming prepared with some type of letter indicating exactly what you want. Not all RCMP detachments can take fingerprints either, so best to call ahead and make sure yours can. The final price for the check was $55 plus $25 for the electronic fingerprinting, for a total of $80.

I received the final criminal record check via postal mail exactly 8 calendar days after I had my fingerprints completed. Looking at the document, they processed the scan in Ottawa the day after, and then I imagined mailed them out in the next day or two.

All in all a very easy and straightforward process. If anyone is interested, here is what the completed certified criminal record check in Canada looks like – I’ve blurred out some key features such as my fingerprints and photo (don’t want anyone impersonating me!), but you get the idea. 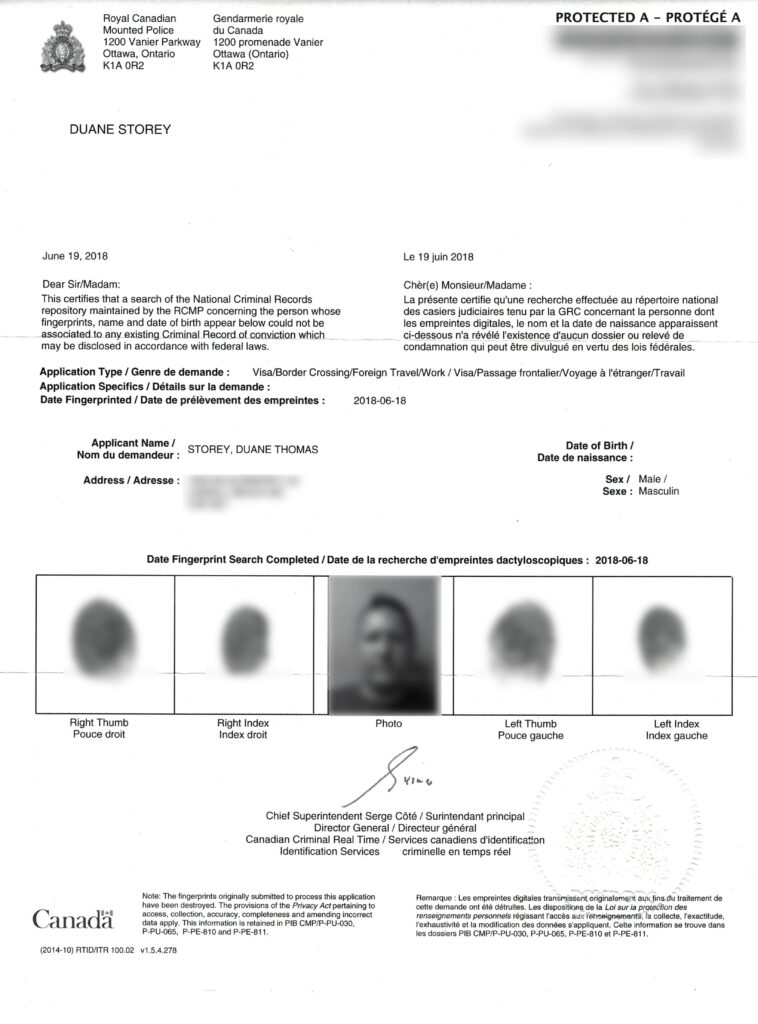