One of the requirements for most long term visas in Spain is to acquire medical insurance in Spain. This requirement can be satisfied a variety of different ways, such as obtaining long-term (1 year or longer) travel insurance that has worldwide coverage, or by obtaining coverage from a private company in Spain.

In terms of the non-lucrative visa for Spain, the coverage must allow at least €30,000 of coverage per year, and also not have a co-payment component. A co-payment (in North American terms) would be more like a deductible, that is a type of fee you have to pay every time you go visit a doctor or have any health services. The rationale with a co-payment plan is that it encourages people not to visit the doctor for every single issue, since they have to share in the cost of the coverage. For most long-term Spanish visa requirements, the consulate instructions often say the plan must not have a co-payment component. So this is something to definitely be careful about when you purchase a plan.

The primary plan that most people told me would satisfy the requirements was the Sanitas Mas Salud (without co-payments) plan. Sanitas is a very large private health insurer here in Spain, and they have a good reputation. I contacted a few agents for Sanitas (such as Sanitas Expat) and received a quote of approximately €72 per month.

At about the time I was getting ready to go ahead with that option, I went into BBVA to open a bank account as a non-resident. During the application process the lady told me that they had a special deal with Sanitas, and if I needed coverage she could work some magic for me. I asked her to give me a quote, and for a no co-payment plan with Sanitas, she said it would be roughly €38/mo, which is a pretty big savings. She also offered to waive my yearly bank account fees if I signed up with that plan, which would be another savings of approximately €60/year. So together, it seemed like a pretty great deal.

I emailed Sanitas to get a clarification, and the agent I managed to track down said the plans were virtually identical, except the second one typically requires a person to pay into the social security system here to qualify. Since I don’t pay into the social security system here, I went back to the bank to try and sort out if I was actually eligible for it. 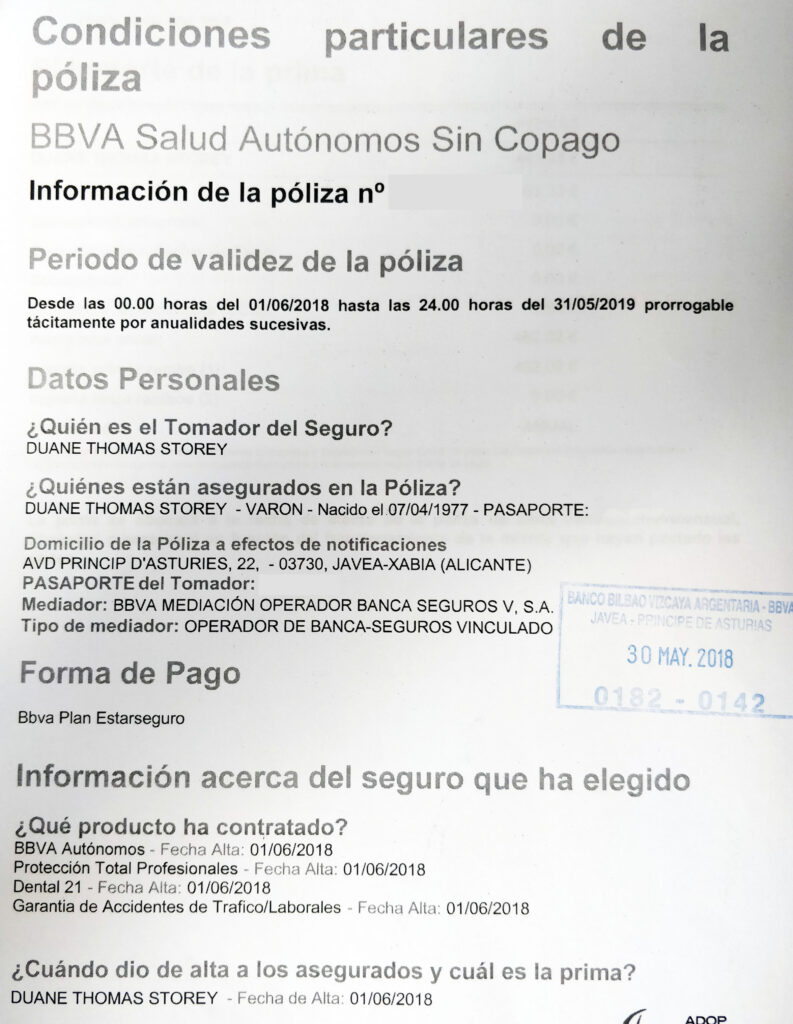 She assured me it was a special deal for BBVA bank members, and I’ll admit, I wasn’t entirely convinced. But she pointed out that ultimately it was Sanitas’ decision, and the only information they had for me was my address as a non-resident and my passport information. So anyways, I decided to just go with the flow and see what happened with it. In total, assuming this medical insurance went through, it’s approximately of savings of €516 per year, which almost pays for the non-lucrative visa itself.

I went back over the course of a few days here in Spain and each time I went back the bank still hadn’t received the approval. I went back again the last time, and sure enough, she said it had been approved. She helped me login to the Sanitas website, where it showed proof of my coverage as well as my contract with them.

If my non-lucrative visa application has any issues, I suspect it will be with regards to the nature of this medical insurance. In truth, the main reason I have it is to satisfy the visa requirements, as my Canadian medical insurance plus additional travel insurance will still apply to me for the first six months I am in Spain, so I’m not actually that worried about the coverage itself (yet). Also, the bank agent gave me her email and phone number in case there were any future issues, at which point she said I could adjust the plan if required. But I’m hoping since I have proof of insurance, even though it’s a plan geared towards self-employed people (which at some level I am, just not in Spain currently), that it will be enough for the consulate in Toronto.

The entire process took roughly a week, and likely went smoother because I was actually in Spain at the time. But there are various Spanish companies (targeted towards expatriates) who represent Sanitas, so your best bet is to contact one of them. There are also many other insurers you can use, but I felt the most comfortable myself using the largest insurer here.