The Empadronamiento, often called “el pardon”, is the process of registering yourself with the town hall in whatever city you decide to live in. This used to be a simple formality – basically you would go down, tell them the address you are living at, without proof, and they would register you. It seems now that the process is much more involved, possibly due to people taking advantage of it previously.

So why would you want to get your padrón? Well, if you want to become a resident of Spain, or to receive your TIE card after arriving, you are going to need this document.

Truthfully, this is the part of the process that caused me the most grief. I read beforehand that AirBNB rentals were not accepted for this process, so I decided to register at a school and take advantage of the included boarding. I quickly realized thought that it wasn’t going to work – if you don’t have a contract for an entire apartment (i.e. you are renting just a room), you need the person who owns the apartment (or someone who lives there and has also previously registered for their padrón) to vouch for you in person. I asked the school and they said they weren’t willing to do this for me. So much for that idea.

I also learned during this process that the town hall’s typically want to see a three to six month rental contract to register you. Three months didn’t seem so restrictive for me, but six months staying in a city you aren’t entirely sure of seems quite onerous. I also heard rumours that seem people were asked to show a contract for a full year, which is even worse. So you should definitely plan to find a place to live for at least three months, and maybe just double check with your landlord that it would be possible to extend it to six months if you need (or ask them to put a clause in the contract that you can extend it another three months, even if you don’t plan to use it).

I ended up renting a room in an apartment with a few other international expats, so I didn’t end up needing a lease. What I did need, and what I confirmed that my landlord would be able to give me beforehand, was to fill out authorization form giving me permission to register at his residence. He had to come down to the appointment with me, in person, will a filled out application form, and a signed photocopy of his passport information. They wanted to see this signature in person and verify his identify, so it’s best to make sure this person comes down with you.

He was also asked to bring a bill in his name just to prove that he still has ties to the place (and isn’t just registered at the apartment because he forgot to unregister when he left). So my landlord brought a copy of his Vodafone internet bill in the apartment, which was enough for them.

After that, they entered my information in the computer and printed out two certificates – one to be used for obtaining residency (which was needed for obtaining my TIE), and another one to use if I registered for public health (which I didn’t think I could do anyways, but I took it all the same). It wasn’t a very difficult process, but you really do need to have your documentation together for this. And often that means committing to staying somewhere for three to six months at a minimum. 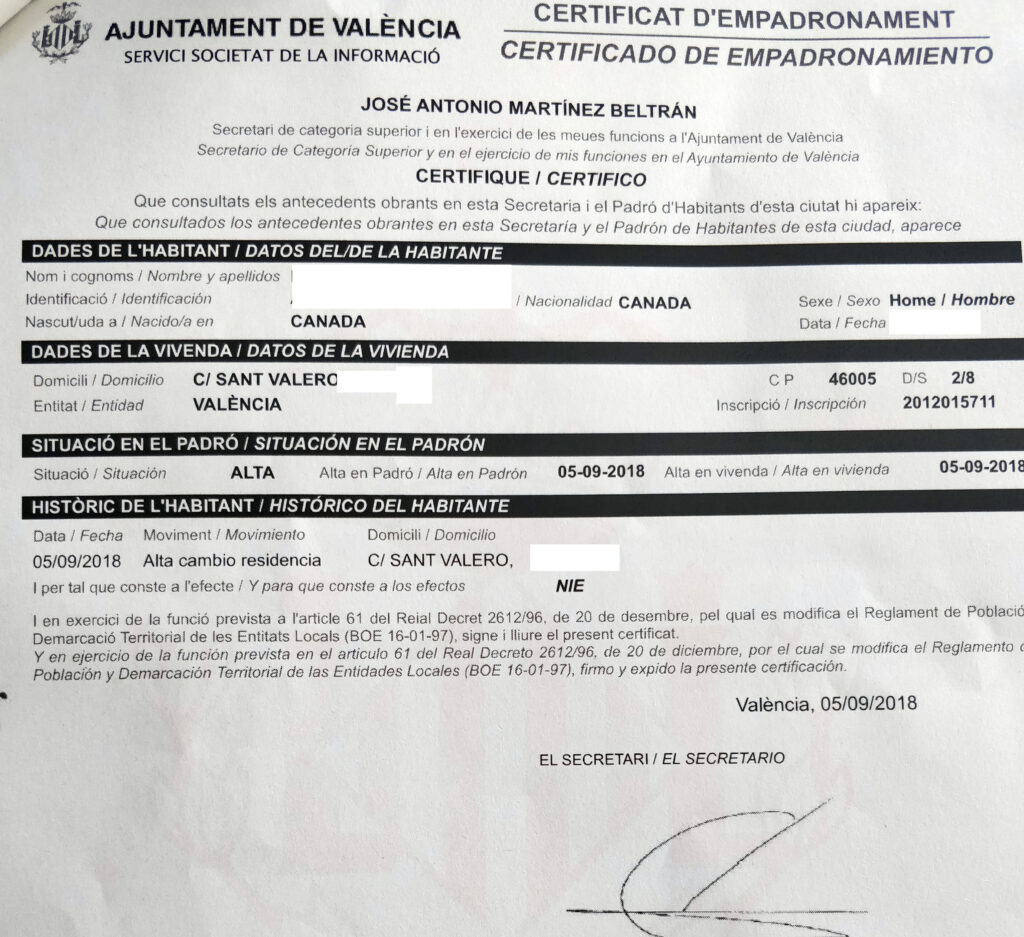 In case you’re debating trying to scam the system somehow (for example, making a fake contract), know this – they will sometimes send a police officer to your location after registering to make sure you are actually living there. So if you do try to fake it, not only will you likely get caught, but you could also get the person who actually lives at the location in trouble as well.

I said that you couldn’t use an AirBNB for registering, but there actually is a way around it. Before booking, tell the person you are renting from that you need to get your padrón, and to get that you will need a rental contract. Sometimes the person who owns the flat will help you out and do up one that basically reflects the same terms as the AirBNB rental – if you both sign it, you can likely use that to register for your padrón, but you’ll definitely need something in Spanish that’s more official that an AirBNB receipt.

Once you are on the padrón for a house or apartment, you essentially stay that way unless you unregister at a later date. That’s why many landlords (especially AirBNB owners) don’t want anything to do with it – it’s a lot of work just to have someone registered at their place temporarily. And if you don’t unregister properly, it could cause them problems in the future. In addition, if you are renting from someone who isn’t declaring the income they receive, then without a doubt they won’t be helping you register at the location.

I’ve heard a few stories of people actually managing to register at a temporary residence (AirBNB for example) without the owner’s permission. I doubt you could get away with this now, especially not in the larger cities. But once registered the landlord will eventually be notified (via mail) that someone has registered there, and if they didn’t give you permission, they will likely be pretty upset when they find out. I read a story from a Spanish landlord who said he was having trouble selling his place because someone registered at it, years before and without his permission, and now they won’t allow him to unregister that person without that person’s permission. So best to do this process properly.

I was a bit surprised how difficult this process was, mainly because I included a letter in my non-lucrative visa application stating my desire to spend my 12 months travelling around Spain (and was ultimately approved) But the reality is that’s not really possible, or at least, not without renting a place for three months or longer at first. In retrospect, that’s not such a bad thing, as it’s good to spend some time in one place at the beginning and get settled, but I wasn’t expecting it when I submitted my application. But this process definitely caused me a bit of stress, primarily because I had pre-booked my appointment to receive my NIE card, and the date was fast approaching even though I hadn’t finalized a place to live, or my padrón.

You’re going to need an appointment to get your padron, which you can obtain online at whichever town hall is closest to you. When I went to book mine, they didn’t have any appointments available for at least a month – since I needed to apply for my TIE card before then, that really didn’t work for me. So what I ended up doing was to go down to the town hall myself and then explain the situation. I brought the paperwork showing that my TIE appointment was the next day, after which they scheduled me for an ‘emergency’ appointment the next day, just prior to my TIE appointment. So I managed to get my padrón and my TIE all in the same day, which was great.

Dealing with Spanish bureaucracy isn’t very much fun, but just focus hard and get through it. While everyone you deal with is typically nice, you quickly get the feeling that everyone is operating in their own little bubble chambers, and none of the different branches talk to each other (which is why you hear stories of people being bounced between two branches over and over because they keep getting told different stories). You’ll prevail, just like I did, so don’t worry. Welcome to Spain!

You can read about my experience obtaining my TIE card in Spain here.

Update – you can also obtain your padron using your digital certificate in Spain if you have one.